Up to 2 Months Free! Virtual and In-Person Tours Available! 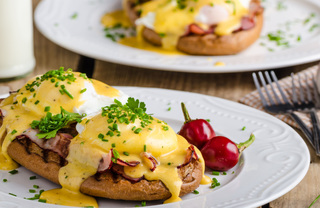 Just as sure as finding a great bargain on rent in LA, you can bet your bottom dollar that there will be plenty of brunch spots for you to check out every couple of months or so, when you want to expand your horizons with something new. That time has arrived yet again, and if you already live in (or don’t mind venturing) downtown, we’d like to call your attention to a few spots that are definitely worth your attention.

What should you expect at these new additions to your LA food scene? That’s exactly what we plan on learning today. We’re going to take a look at the these (some new, some old) neighborhood favorites, and give you some ideas on where to head for that next October brunch with your friends. Maybe you’ve been to a few before? Maybe you’re just now hearing about them? Either way, now’s the time to check them out.

There’s been talk for a while of The Gables opening up on Wilshire in Santa Monica. Eater anticipated that this homage to the original Gables (which, tragically, burned down in 1930) would “emphasize a market-driven menu, with all baked goods prepared onsite.” They also commented positively on the team that was being put together to helm this ambitious venture — “Superba and Beacon veteran Vicki Fan Matsusaka; Daniel Boulud’s former restaurant group manager Juan Ramirez, and first-time restaurant owner Kevin Lazan.”

So what’s the verdict since the new-and-improved Gables opened its doors in August? Eater’s seems to have the scoop on that as well, paying compliments to both the setting and the food. On the former, they noted that the overall feeling of the restaurant is bright and open, on account of the ample amounts of light coming through the expansive windows and faux-skylights. On the latter, the keyword to take away is “balance.” The Gables does a great job juggling different styles of cuisine to create a menu that delights from breakfast to dinner (the seared salmon is a particular treat, if you’re interested).

As for those delectable “baked goods prepared onsite” Eater was calling attention to, you can find those served at 7:30AM (if you’re the early type who can show up near the break of dawn). If you aren’t so keen on heading out at the top of the morning to get your pastries, though, you can take solace in the fact that you can grab your favorite treats, along with some coffee, throughout the day.

Head to the scenic backdrop of Beverly Hills, and you’ll undoubtedly come across Ocean Prime, the eatery that Eater LA describes as “expansive,” “futuristic,” and “flavorful” when it comes to their food offerings. When it comes to Sunday Brunch, Ocean Prime pulls out all the stops with their menu, serving up a range of sandwiches, salads, soups, and entrees.

The so-called “Prime Brunch” offerings run the gamut from smoked salmon to French toast, but the fine mix you’ll find in the food here doesn’t stop there. You can get sushi, quiche, lobster, and much more when you head to Ocean Prime, all in an atmosphere that USA Today had to list on its list of best spots in Los Angeles:

“With its welcoming patio (especially at night when the fire pits are burning brightly), convivial bar, warm main dining room, top-notch staff and deliciously diverse menu, the eatery has quickly become a popular spot for both locals, tourists and Rodeo Drive shoppers hungry for a quick bite or a full meal.”

One thing to note, however, is that Ocean Prime has a reputation for getting crowded. It’s a popular spot, and more than a few people want to grab spot, especially during the brunch rush, so making a reservation ahead of time would be a wise move. You can do so easily from the Ocean Prime website, and show up for brunch without the headache or long wait times.

This is a modern, award-winning take on American food, and another feather in the cap of famed restaurateur Cameron Mitchell. If you’re looking for a vibrant and diverse brunch spot to add to your list, Ocean Prime should definitely be making the cut.

Self-described as “modern American-fare, intended for sharing,” the large plates of delicious-and-inventive food served up here should come as no surprise. When it comes to the brunch menu, Little Beast has an eclectic mixture of dishes, including their Thai-style donuts, grain bowls, breakfast burritos, and tostadas. You’ll not want for variety when you step foot in this Eagle Rock original, and the spot has fast been collecting accolades from the press.

In a rather glowing review from LA Magazine, the restaurant’s willingness to switch things around with their menu — to try a new direction from time to time — has served them well in becoming a neighborhood favorite, and, according to chef Jose Perez, adding a bit of “friendliness” to the menu has contributed to their success as well:

“We try to give [guests] an experience that is really friendly even when they’re eating something that took forever to produce.”

It’s a decidedly down-to-earth experience, if you’re interested. Be sure to get a load of the menu beforehand to get a good idea idea of what you’ll want to order once you grace Little Beast’s doors, or leave it up to chance and pick from the menu at random. Either way, you’ll be ending up with something worthy of making this one of your new brunch spots.

When you’re living in some of the cities most desirable locations, like Atelier, there’s more than enough in the way of shopping, entertainment, dining, and more to keep you occupied. Each day offers something new around here — be it brunch, or whatever else strikes your fancy. Be sure to check out what all the buzz around one of DTLA’s most talked-about communities is; check out Atelier today and learn about making this your new home in a revitalized downtown.

Living in Los Angeles offers boundless enjoyment for those that call this exhilarating city their home.