US Open of Surfing 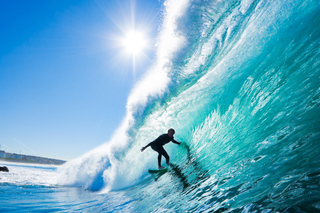 If you’re looking for apartments for rent in Los Angeles, CA, it’s probably not a stretch to say you’re a fan of warm weather and beaches. If you’re a true beach aficionado, there’s also a good chance you’re a fan of grabbing the board and hitting the waves too.
If that’s the case, then you might be interested in checking out this year’s iteration of the US Open of Surfing, no? If you’ve never heard of it before, TimeOut has a quick overview that sums everything up nicely:

“America’s largest pro surfing competition attracts the world’s elite, who compete for big money while wowing 200,000 beach boys and girls with their skill, grace and innovative board designs.”

That’s just the tip of the proverbial iceberg, though, and you’ll definitely want to read up on a few details before you head to Huntington Beach to experience the action. Which is where we come in — we’ve assembled all the information you’ll need to experience this event in its full effect, so read on for the lowdown on this surfing extravaganza.

What the US Open of Surfing Is All About

Would it surprise you to learn that the US Open of Surfing is the largest surfing competition in the world? Originally known as the West Coast Surfing Championship, and later the United States Surfing Championships, it was rebranded as the US Open of Surfing in 1994. It has always been a major feature in the world of surfing, however, attracting hundreds of thousands of visitors and generating millions of dollars yearly.

Traditionally held over several days during the late summer, this year’s Open will take place from Saturday, July 28th to Sunday, August 5th. You’ll find all that action at Huntington Beach (more on that later) and can view the full schedule of events on the official US Open of Surfing website. There are plenty of events taking place over the course of the competitions, encompassing the WSL Women’s Championship Tour, Men’s Qualifying Series, and various combined Pro Junior events.

They don’t call it “Surf City, USA” for nothing. Huntington Beach has long been associated with this spectacular water sport, and has a “baked in” beach culture that’s hard to ignore. For starters, the waters around Huntington Beach make it ideal for catching waves, as they’re enhanced by the interaction of various ocean swells, creating great surf almost year-round.

Then there’s the long history Huntington Beach has with the sport of surfing. It stretches back more than 100 years, when surfing pioneer George Freeth held the first “surf riding” demonstrations in the beach’s choppy waters. More wave riders were to follow, names like Dave Kahanamoku, the “Boys of ‘55,” and others cemented Huntington Beach’s name in the annals of surfing history, and to this day people flock from far and wide to experience these legendary waters for themselves.

Highlights for the 2018 Competition

There will be plenty of athletes showing their skills off this year. The most anticipated may well be those members of the Men’s Championship Tour. The US Open of Surfing has highlighted these phenoms on their competitor’s page:

Among these many worthy competitors, you’ll want to keep a special eye on Kanoa Igarashi, a Huntington Beach native and the winner of last year’s US Open of Surfing. His personal journey is almost storybook:

“Just at the age of three, Igarashi was already hitting waves twice his size. It didn’t take long for him to gain media attention and make a name for himself worldwide. At 18, he became the youngest surfer on the Men’s Championship Tour in 2016. He was also the first Asian to qualify on the predominantly Australian and Brazilian roster.”

His win at the 2017 Open cemented his status as the “real deal,” and this year he’s looking to add to his legend. Interesting to note, though, is the fact that he’ll be attempting this as a representative of Japan and not the United States, as he’s going to be a member of the Japanese national team come the 2020 Olympics. The decision, to Igarashi, is a matter of honor and respect:

“The decision is Kanoa’s way of saying thank you for the sacrifices his parents Misa and Tsutomu made so that he could pursue professional surfing. Both of his parents came from humble backgrounds. His mother's family still own a noodle restaurant in a quiet sector of Tokyo and his father’s family run a custom steel business.”

Regardless of the the flag flying next to his name, watching Igarashi surf is going to be a highlight of the Open, as will watching female competitors like Caroline Marks — the youngest surfer to ever qualify for the Women’s Championship Tour. The sixteen-year-old has been “making waves in the surfing world, and as Surfer so elegantly describes, her heavy-footed, powerful style shows that she has a wealth of skills far beyond what her meager age would suggest.

No matter who you’re rooting for, though, this year’s competition is bound to be exciting. Make sure you check out that schedule in detail and make it down to Huntington Beach in late July so you can see these surfers give it their all.

The Apartments for Rent in Los Angeles, CA, Hold Even More Surprises

When you’re a resident at premiere apartments like Atelier, the beach and all its wonders are only a hop, skip, and jump away. That’s not the only feature you’ll enjoy here, though. You’ll also be in prime position to the best of LA’s revitalized downtown area, all while nestled in the comfort of superbly spacious living units and the most modern conveniences you’ll find in an apartment complex. Be sure to check out everything this innovative community has to offer, and make it your first choice for experiencing the LA lifestyle like it was meant to be.