The Cathedral of Saint Vibiana 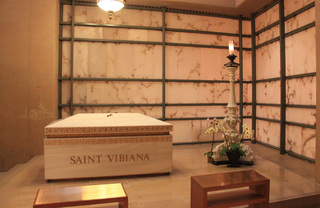 Just moments from the high rise apartments in Los Angeles, at the corner of 2nd Street and Main, a century-old structure, once the city’s official cathedral, sits prominently against the backdrop of DTLA. We’re referring, of course, to St. Vibiana’s Cathedral, the city’s first cathedral, and one of the few landmarks that remains from LA’s 19th-century origins:

“Designed by architect Ezra F. Kysor, one of Los Angeles’ first practicing architects, the cathedral was a stunning work of architecture in a town still emerging from its pueblo origins. Its Early Baroque façade was patterned after that of Sant Miquel del Port in Barcelona.”

Today, with it years of being an official church behind it, Vibiana is a well-known event and performing arts location, one that has survived attempts at demolition and is even listed on the National Trust for Historic Preservation’s list of America’s Most Endangered Places. There’s a wealth of history and wonder in this old building; read on, and we’ll be filling you in on all of the details surrounding this architectural marvel.

The History of Vibiana

Though it wasn’t completed until 1876, plans for building Vibiana dated all the way back to 1859, when the land for building it was first donated by Amiel Cavalier. Ezra Kysor and WJ Matthews, in designing the structure, modeled its facade after a Baroque-era church in Barcelona, Spain, as a nod to the then-Los Angeles’ Bishop’s childhood growing up in the country. After work on the cathedral started, it took five years of construction to complete, and finally opened in 1876.

The first cathedral constructed for the Diocese in this part of California, Vibiana was named by Pope Pius IX, who chose the name of the 3rd Century Roman martyr (not to be confused with the 4th Century saint, Saint Bibiana) and had her remains removed from the Catacombs of Rome and moved to the new church to rest.

At the time, St. Vibiana’s Cathedral was capable of holding on-tenth of LA’s residents, but as the city’s population increased over the years, changes to the structure were made to try and accommodate the growing number of people in the area. In 1922, architect John C. Austin created an addition for the building, a new facade on Main Street created from Indiana limestone, based on a Roman design.

The Cathedral of Saint Vibiana’s destiny took a turn after the 1994 Northridge earthquake. The tremors caused massive damage to the structure, and rather than repair it, the Catholic Archdiocese thought it better to demolish the site. They got to work in 1996 (without the necessary permits, we might add) but the move drew swift criticism from the community and preservationists, who succeeded in gaining a temporary restraining order to save the church.

Following a heated battle between the church and preservationists, a suitable compromise was reached. The City of Los Angeles would take the land, and grant the church new land a few blocks away, near the 101 Freeway to construct a new building, Cathedral of Our Lady of the Angels.

In 1999, the city sold St. Vibiana’s Cathedral to Tom Gilmore and a group of downtown developers for a sum of $4.6 million. After years of planning and retrofitting, the building, now simply known as Vibiana, was transformed into a state-of-the-art event venue, hosting fashion shows, fundraisers, musical acts, and more to this day.

No longer part of the church, Vibiana’s grounds and interior have been completely transformed. A supplementary building, a rectory and school area added in the 1940s, was demolished to make room for the Little Tokyo Branch of the LA Library. Where once there was seating for for the faithful, the Main Hall is now the primary event space, with an ability to seat between 500 and 800 guests, depending on the type of event being held. Additional seating can be accommodated out in the garden, which sits next to the main hall, adjacent to 2nd Street, and is often used for weddings and similar gatherings.

Speaking of weddings, they’re part of Vibiana’s current bread and butter. The space regularly host them, and they’re not shy about the accolades they’ve accumulated over the years, which include:

Indeed, you can rent the space for your own nuptials (or another event) if you’re interested, and Vibiana has a rather helpful FAQ to answer most questions you might have about renting the venue. You can get an idea of how the setting looks by checking out the virtual tour of the venue or the layout available on their online floorplans. Though its purpose has changed, Vibiana remains a testament to a past-era in LA’s history, and a landmark you should definitely check out at least once in your life!

If you’re thinking the Cathedral sounds like a wonderful bit of authentic LA culture to check out, then you’re in luck — there are amazing things to see and experience all around apartments like Atelier. Here in the heart of Downtown Los Angeles, big name buildings like the STAPLES Center, LA Convention Center, GRAMMY Museum (and more) call the area home. Add to that the parks, shops, restaurants, and just about anything else you could ask for, and it’s not hard to see why DTLA is considered top-tier when it comes to style, class, and culture. This is an LA experience like no other, so come see what Atelier is all about, join the community, and experience a warm welcome to the neighborhood!