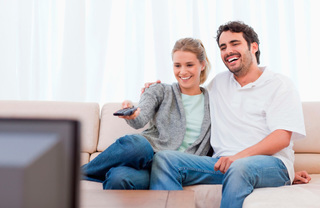 Sometimes it’s fun going out on the town. Other evenings, though, we know you’d much rather relax at home and take it easy! Next time you’ve got the urge to just kick back and lounge around the high rise apartments in Los Angeles, why not grab a friend and accompany your relaxation session with a fun romantic comedy? Even if the genre isn’t exactly your cup of tea, there are plenty of classics that will hold even the greatest skeptics attention, and plenty more that true romantic comedy fans will always appreciate. Today, we’re running down the list of the best, so you can have plenty to pick from on your next night in.

What makes a “romcom?” Writer Brian Finnegan breaks down the essential ingredients in his classic blog post, The Five Golden Rules of Romantic Comedy, informing us that a good romcom typically contains these important story elements:

So, which films out there fit the bill? Rotten Tomatoes has already compiled the 50 best to ever do it, but we’d like to highlight a few of our favorites from the romantic comedy hall of fame...

As if the title doesn’t tell you what you need to know? In this 2011 film, Steve Carell plays Cal Weaver, a man with a seemingly perfect life. That all comes tumbling down when he discovers his wife has been cheating on him and wants a divorce, however, and we then follow Cal through his navigating of some turbulent times. The movie is equal parts serious and humorous, and has a sweet tone that will tug at your heartstrings throughout. If you can endure the slow start, this is definitely a great romcom for more mature audience members. Plus, it stars Steve Carell, Emma Stone, Julianne Moore, and Ryan Gosling — what else do you really want?

It doesn’t get more iconic and game-changing than Clueless. This 1995 release was actually a re-imagining of a Jane Austen story, written more than a hundred years prior, and follows the trials of rich teenage girls Cher and Dionne (played by Alicia Silverstone and Stacey Dash). There are plenty of antics, searching for love, and unexpected surprises to enjoy along the way, and overall, Clueless is plenty of fun for what was just supposed to be a silly summer teen movie. If you can stand the cutesy, saccharine nature of the story, this one is right up your alley.

There’s Something About Mary

The classic 90s romcom is one you have to watch, even if it’s just once. The plot of There’s Something About Mary is too ridiculous and convoluted to describe without breaking down into uncontrollable laughter, but know that Ben Stiller, Cameron Diaz, Matt Dillon, and ludicrous antics abound in this film, and you’ll find plenty of humor in what is undeniably a dumb and crude adventure. This film broke plenty of rules in the pursuit of comedy, and those risks paid off tremendously, creating a classic that’s still a rip-roaring good time to this day.

Based on the smash-hit novel by Helen Fielding, Bridget Jones’s Diary stars Renee Zellweger as the title character — an alcoholic British woman with a plethora of social dilemmas. She must navigate the minefield of love and career, and the film is a much-beloved distillation of urban life for the female thirty-something. It doesn’t just appeal to thirty-somethings, however, as this film has plenty of sharp British wit to keep you chuckling throughout. You’ll hopefully adore this adaptation as much as we did, for both its humor and heartwarming soul.

Steve Carell makes our list again, starring as the titular 40 Year Old Virgin, Andy Stitzer. This middle aged geek has yet to be intimate with a woman, so his friends (played by Paul Rudd, Romany Malco, and Seth Rogen), conspire to find a love for their anxious pal. As movies in the genre go, there are twists and turns abound, and plenty of laughs along the way. Fun fact — this was the first feature film directed by the hilarious Judd Apatow, and, as critic Claudia Puig of USA Today so expertly stated, “It’s worth making a date with The 40 Year Old Virgin.”

Billy Crystal and Meg Ryan falling in love, directed by the legendary Rob Reiner? How could you not love this movie. When Harry Met Sally is a beautiful and touching film that hits all the right romantic comedy beats, tugs at your heartstrings, and provides the kind of brainy humor that just about any viewer can enjoy. Sure, you could knock the film for being a bit of a vintage Woody Allen ripoff, or, you could get off that high horse and strap yourself in for a smart script that will make you feel something real.

When it comes to spending a night in curled up on the couch, the setting at apartment communities like Atelier provides the perfect atmosphere. Resting high above the city streets with a peerless view of the entire town — what could be better than that? If this sounds like your way to live, then take the next step; check out what Atelier has to offer, and inquire about our availability to make one of these amazing apartments your very own.