Movies Under the Stars in DTLA 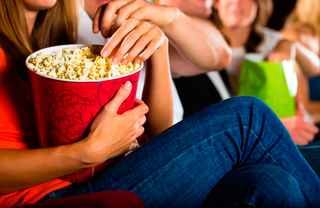 If you want to try a movie watching experience that’s wholly out of the ordinary, however, why not try watching some flicks in the open-air under the starry skies of the city? The Rooftop Cinema Club is already in the midst of a thrilling film series right in downtown, according to LADT News:

“There’s no need to wait until summer, however, to catch an al fresco film in the Central City. That’s because the Rooftop Cinema Club recently launched its second season in the heart of Downtown. The lineup is packed, with up to five films a week in the Financial District.”

Interested in heading to the rooftops to see what’s sure to be an exciting show? Read on, because today we’re going to learn more about the Rooftop Cinema Club and the movies they have slated for their current run.

What Is the Rooftop Cinema Club?

Founded by Gerry Cottle and billing themselves as the “ultimate film experience,” the Rooftop Cinema Club strives to make cinema an “event,” and a social one at that. At their screenings, you’ll not find the impersonal, antiseptic experience of seeing a movie at a run-of-the-mill theatre.

You are instead treated to social gathering that’s as much about the movie and setting as it is about the communal atmosphere. Rooftop Cinema Club sets the mood with drinks, special guests, and games before each movie, and that’s just the tip of the proverbial iceberg.

Projecting their movies on a giant outdoor screen, Rooftop Cinema Club fits you into their rooftop space along with close to a couple hundred other guests (on a packed night). You sit, comfortably, in their luxurious deck chairs, leaning back among under the stars. The ample leg room allows you to spread out, and the views of the city from on high are the perfect complement to the action and drama that plays out on the screen.

Speaking of which, they maintain the delicate balance between allowing you to hear everything that’s going on in the film and not disturbing the entire neighborhood by providing high-quality wireless headphones to every guest. The headphones serve the dual-purpose of keeping the sounds of the outside world away, so you can focus on the progression of the plot without any interruptions to your focus.

Rooftop Cinema Club justifies the weighty ticket prices due to the myriad advantages their setting provides, which they handily lay out in a blog post entitled Why You Should See A Movie On Our Rooftops. In it, they hype-up the magic you’ll experience when you see a movie amongst like-minded cinema lovers and the memories you’ll forge by way of the fun perks on offer. Whether these are enough to inspire you to one of their locations is up to you, but it might be worth taking a look to learn what you think.

Public reception, for the most part, is quite good. Taking a look at Yelp, you can see that Rooftop Cinema Club’s DTLA Location has an average of 4.5 stars, and some rather cheery commentary to boot. Cinema goers praise the staff:

“The friendliest Rooftop Cinema employee greeted us and gave us all the info we needed to know. She was a great start to the evening.”

“It's a fun vibe before the movie! There's usually a food cart serving up some great food, we've had tacos from a local eatery and last time I was there Umami Burger was the option.”

And overall, love the idea of watching movies outdoors:

“The concept of this is great. Who wouldn't want to watch a movie on a rooftop in LA?”

You can see it for yourself at LEVEL, which is located at 888 South Olive Street in Downtown.

What Movies Are Playing Soon?

There are three locations throughout Los Angeles: the Ricardo Montalban Theater in Hollywood, NeueHouse, and LEVEL downtown. For our purposes, we’ll be turning our attention to the latter, the DTLA location. Here’s what they have in-store through the end of June:

All screenings start at 8PM, and a few of the showings are special anniversary editions, which will be packed with some extras for you and your friends to enjoy.

Living at Atelier Makes it Easy

In the event that you just can’t make it out, or prefer the familiar atmosphere of a luxurious apartment interior, you’ll be well-served by places like the pet friendly apartments in downtown Los Angeles, Atelier. With some of the most well-designed and well-outfitted residences in DTLA, it offers the perfect backdrop for a movie watching experience tailored just the way you like, and the company and community you’ll find here is quite unlike anything you’ll find elsewhere in the city.