Little Tokyo Is Haunted In Oct 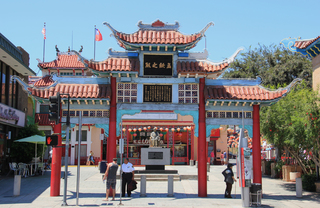 With the Halloween excitement reaching a fever pitch, it's easy to overlook some of the assorted goings-on while preparing that five-star costume party outfit or looking for the most extravagant social engagement to show it off at. Such exciting touches, like Haunted Little Tokyo, may well have flown underneath your radar, but no longer. In the time it might take you to research how to rent an apartment in Los Angeles, you can also learn about this thrilling transformation of one of its most iconic neighborhoods. Just in time to find out what attractions might appeal to you most and venture down to see the wonder for yourself.

What's Going On In Little Tokyo?

If you weren't already aware, a bit of background first. Little Tokyo is one of Downtown Los Angeles' fifteen districts. Located just south of the 101, Little Tokyo holds a distinction as one of the three "official" Japantowns throughout the United States, and is the home of the largest Japanese-American population in the North Americas. The area is well-known for the heavy influence that Japanese culture has played on its appearance and general "attitude." Seeing that expressed in combination with Halloween-style is truly a sight to behold.

Haunted Little Tokyo, taking place from October 13th-28th, promises a total transformation of the neighborhood's normal character into something decidedly different, culminating with a massive block party held on the final day of the event. There will be food trucks, live entertainment, and a host of other things to do and see. That final day promises to be the most gratifying of them all, as the Block Party is stacked from start to finish with fun happenings with a diverse range. Here are the highlights:

Downtown in the city might not be the place where you'd first expect to find fresh pumpkins, but thanks to Tanaka Farms, they'll be in plentiful supply for anyone that wants to make a purchase. From 2-8PM at the Japanese American Cultural & Community Center Plaza (JACCC), interested parties can show up and snag locally-grown orange wonder. The funds raised from the pumpkin patch sale will go to Kizuna, a "Los Angeles-based nonprofit organization educating, empowering and engaging a future generation of Japanese Americans."

There's a hint hidden in that title. This flash mob performance will bring together an assemblage of "friends, families, and local residents" who gather with a singular goal in mind: act out the electrifying energy of Michael Jackson's "Thriller" in conjunction with thousands of other participants the world over. This will take coordination and skill obviously, so there's a rehearsal that takes place before the main event(s) at 1:30PM (also at the JACCC). After that, the first showtime is held at 3PM on Azusa Street, and a second Block Party showtime at 8:30PM on 2nd Street. It's free to enter, so if you've got the moves, show up and show them off.

Did you know Little Tokyo had a haunted past? This is the time to learn all about it. The guided walking tour, held in conjunction with the Little Tokyo Historical Society (LTHS) takes participants on an adventure that involves many of the district's historical buildings while weaving in bone-chilling ghost stories and paranormal occurrences that have taken place over the past hundred years. Like the Pumpkin Patch, the proceeds from this event go to a worthy cause: supporting the preservation of Little Tokyo and its rich history. The tour takes place from 5-6PM and begins in front of the Go For Broke National Education Center.

Kids Screening Of "My Neighbor Totoro"

Would it be a Japanese-themed event without at least a little bit of one of the country's most hailed cultural exports? "My Neighbor Totoro" is a family friendly animated film from one of the most beloved Japanese studios: Studio Ghibli. Taking place at the JACCC Plaza and presented by Go Little Tokyo in conjunction with Anime For Humanity, the event will give attendees an opportunity to spread out and immerse themselves in the charming film from 6-7PM.

Showcasing the events horror elements is a screening of "Ju-On" at 9PM. This horror film is one of Japan's most well-known (but certainly not the only one, as they've got a long tradition of making spectacularly spooky cinema). Much like the screening of "My Neighbor Totoro," this event will take place at the JACC plaza and allow guests to spread out with a blanket and something to eat from one of the many food vendors in attendance. Unlike the "My Neighbor Totoro" screening, however, there will also be a selection of beer and wine for the adult moviegoers to enjoy as well.

The Big Block Party starts at 5PM and will feature a whole slew of live entertainment, food, games, and other diversions for the revelers who want to get in on the action. Admission is free, and grants access to shows from DJ Phatrick and DJ Kero Uno (among others), arts and crafts vendors selling their wares, a raffle with prizes from Anime Jungle, face painting, and heaping helpings of food from trucks like Churro Stix, Lobsta Truck, Tokyo Doggie Style, and more. The night will also include a costume contest and "frightful festivities" that make the most of the scary season.

For those looking for a bit of extra excitement, the bar crawl is sure to have plenty in supply. A VIP Bar Crawl Pass will run you $15, then grant "front of the line" access to all of the participating bars (along with a free drink at one of your choice). Proceeds benefit charity, and the crawl will last all night long. Plenty of time to get all of your Halloween partying done in style.

Specifically, Atelier, one of Downtown Los Angeles' finest. This chic, upscale complex is right at the nexus of DTLA's heart and soul. The 33-story structure offers a wide range of amazing floorplans that cover a range of styles. The level of choice provides options for multiple lifestyles and needs in regards to space. On top of that, the building is packed with amenities at every level. From the unique comforts of the residences to the concierge service and beyond, Atelier exudes convenience and provides the best for residents as they enjoy the true meaning of rental living in DTLA.