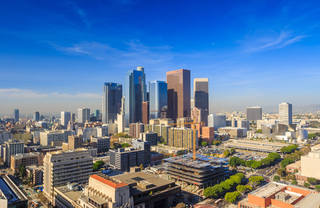 Can you think of any spot hipper and more happening than Downtown Los Angeles (DTLA)? We'll wait, because while you're thinking, downtown is continuing its transformation into one of the most modern and forward-focused communities in the country, so much so that DTLA luxury apartments have become an amazingly hot ticket item. Let's explore...

Not The DTLA You Think You Know

As most know, Downtown Los Angeles is a primary business hub for the city. It's always been busy, but recent developments have given the area something of a renaissance. Old buildings transformed into residences, updates to the rail system, changes in zoning and development, and investment from developers have put DTLA on the upswing, and there's plenty in the area to attract potential residents, enough that the population has jumped from 27,849 to 52,400 since the year 2000.

Each has its own flavor, its own charm. All are uniquely Los Angeles and are home to plenty of unique attractions.

The Music Center and Walt Disney Concert Hall, for instance, some of the best spaces for live performances, and home to the LA Opera. For a walk down the annals of music history, the Grammy Museum has clips, exhibits, and memorabilia that highlights some of the most pivotal moments in the developments of 20th-century music.

Now, to explore all these highlights, you'll need your own base of operations in the city...

The Pinnacle Of DTLA Luxury Apartments

Enter Atelier. Situated near the center of downtown, the building is within striking distance of many of DTLA's most notable features. For food and drink, you've got a wealth of nearby selections. There's Perch, a combination of French-inspired cuisine, fine drinks, and even finer live entertainment. The musical selection is of the utmost quality, and the staff is among the finest in the business. If the bar scene is more your thing, Library Bar is cozy, but still provides the electric nightlife atmosphere that most bar hoppers crave.

For entertainment, you've got some of the hottest options in close proximity. There's the Orpheum Theatre, well known for its impressive architecture and quality performance lineup (musicians, comedians, and the like).There's the aforementioned Walt Disney Concert Hall, which, in addition to being a finely crafted masterwork, is a fan favorite for stunning orchestral performances.

We can't overlook the event calendar. There's no shortage of community driven fanfare coming to DTLA in 2017. From Farmer's Markets to special DJ appearances, there's plenty going on to keep residents occupied.

The Atelier building is a sight to behold. Modern, stylish, spacious, and feature packed from the ground to the top floor (of which there are 33, if you were interested). Floors 6-23 house a number of one and two-bedroom models, as do floors 24-29. Floors 30-32 form "The Collection," while floor 33 is where the penthouses are located.

Units feature quite a few amenities, including a washer\dryer in-unit, wood flooring, stainless steel appliances, and marvelous floor to ceiling window treatments (just to name a few). In select units (such as the penthouses) there are deep soaking tubs, wine chillers, and balconies. The Atelier building exudes luxury throughout the entire layout of each and every unit.

Not only does each unit come upgraded, but the building amenities are among the best. The Atelier includes a round the clock concierge service, fitness room, business room, and spa. For those residents with four-legged companions, there is a pet spa and a dog run. The lap-pool area comes equipped with cabanas and a hot tub. As if that wasn't enough, the rooftop features a splash pool and a BBQ/game area.

With such an expansive history in such a beautiful city, the views are sure not to disappoint. The skyline can easily be seen from the upper floor units with views of all that Downtown Los Angeles has to offer. A Spanish settlement, the first Academy Awards, the trolley line, and the Disney Concert Hall (it's really a big deal!) are just a glimmer of the robust history of this city. No surprise, then, that the future of Los Angeles and the Atelier building is sure to be a bright one. Be a part of this unique societal revolution as the Atelier building fast-forwards you into the future of modern luxury apartment living.