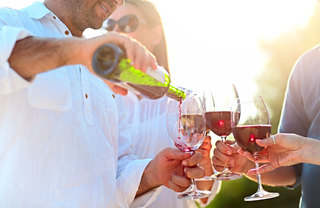 Looking for a last hurrah before the summer officially calls it quits? For all you denizens of the apartments for rent in LA, August will be providing that final chance for summer fun, in the form of the oft-celebrated LA Food & Wine Festival, one of the city’s most spectacular displays of delectable culture cuisine and culinary talent:

“Cuisine and culture collide this August 22-25 as the Los Angeles Food & Wine Festival brings some of the most celebrated culinary talent in the country together for a four day, city-wide, epicurean extravaganza.”

Just what does this festival have in store? For starters, a chance to try out some absolutely amazing food and drink, over a period of four splendid summer days. Beyond that, though, this food and wine festival will be giving you a chance to get up-close and personal with some of the biggest names in the business — world class stars of the culinary realm whose skills are revered both far and wide. If you’re thinking about heading out, be sure to read ahead. Today, we’ll be bringing you all those pertinent details you’ll need to know about in advance of the festival.

Events at the Food Festival

It wouldn’t be a festival without amazing events filling out the calendar, that the LA Food & Wine Festival has them in droves. Fine collaborations, like Dinner and a Magic Show, which is all set to kick off on the opening night of the festival, Thursday, August 22nd. The event, which will be taking place at the Magic Castle will see chefs Jason Fullilove and Andre Beinvenu join forces to deliver some awesome meals with a dose of flair:

“Any visit to the private club, The Magic Castle is always amazing, literally. The mansion is full of surprises, the dining is superb, and the shows are no less than remarkable. LAFW has upped the Magic Castle's game and opened up those 'private doors' by inviting you to not only a magical meal but you'll be attending the Magic Show as well!”

And so it shall continue throughout the festival. Thursday will also be the evening of other spectacular events, including:

Friday will feature but one fine event, but it’s a big one: the Epic Burger Throwdown with Alvin Cailan. You may well have heard the name before, as star chef Cailan is the brain behind the wildly popular Eggslut, with locations across the city (and even a spot in NYC). Cailan, you’ll note is also the host of The Burger show, where he, of course, explores the delectability of this amazing food item that few can scoff at.

Saturday will feature two more events for you to check out, the first of which is LA’s Faves & Craves, hosted by none other than LA’s very own Jet Tila. The second will be The Great Steakout, where, hosted by Curtis Stone, you’ll get to see extraordinary steaks created, and perhaps even sample a few cuts of this choice meat.

Finally, the festival will be wrapping up its event schedule on Sunday with a legendary brunch hosted by Jeremiah Tower. The so-called Brunch So Hard will allow you to do exactly that, so expect fine menu items coupled with all the champagne and mimosas you can handle, and prepare to leave both stuffed and happy you attended.

One thing you may have noticed while looking over the events is the fact that there’s a star-studded lineup. Indeed, a large part of the food festival’s appeal is the fact that so many great chefs show up to make the event a success, and includes names like the aforementioned Jeremiah Tower.

He’s one of the brilliant minds behind what we now refer to as “California Cuisine,” meals driven by focus on local and sustainable ingredients, with special attention paid to the seasonality of various ingredients in a locale. If you’re wondering why restaurants find it hip to change their menu options based on the time of year and what they can get their hands one, you’ve Tower, at least in part, to thank for it!

His is not the only famous name on the list, though. You’ll recall we mentioned Jet Tila? You may have seen him before on Chopped, Cutthroat Kitchen, or Iron Chef America, but in addition to his numerous TV appearances, he’s also the culinary ambassador for Thailand, and holder of several food-oriented records, like the world’s largest stir fry and the world’s largest fruit salad.

And the celebrity lineup goes beyond just the chefs. The Burger Throwdown, for example, will feature an appearance from Seth Rogen — noted comedian and filmmaker. So, if you’re keen on scoring some great eats and experience the greatness of some of the country’s most brilliant minds, the LA Food & Wine Festival will surely be the place for you. Be sure to snag your tickets well in advance, and mark out those days on your calendar so you can attend.

If you’ve ever wondered why people bother calling LA their home, a big part of the reason is fantastic events like the Food & Wine Festival. As one of the most prominent cities on the West Coast, Los Angeles has a reputation for presenting its populace with some of the grandest events you’ll experience across the nation, and bringing some of the finest minds across almost every industry together in one beautiful place. It’s all the more reason to check out stellar communities like Atelier, the downtown paradise that puts you right within striking distance of DTLA’s finest. For apartment living done right, this should be your destination. Check out everything that Atelier has to offer today, then learn about how you can make this your new (and luxurious) home within the City of Angels.