Hit The Best Bars in DTLA 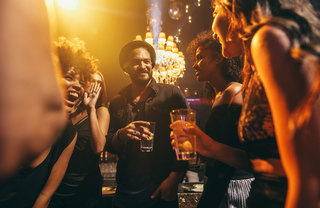 When you think about the most stylish apartments for rent in Los Angeles, CA, and, to be more specific, what’s in the proximity of DTLA, one of the first things that might strike you is the amazing nightlife and preponderance of downtown bars. There’s a hotspot, it seems, to cater to almost every taste, and regardless of whether you want to try something upscale, out-of-the-way, on the roof, or completely different, there’s plenty of variety to go around on this scene. Today, we’ll be exploring some of the best, covering a variety of options so you have some choices to mull over next time you want to hit the town and have a relaxing drink.

Get a group of friends together, then head on down the Rhythm Room, the underground bar on West 6th Street, with a notably throwback aesthetic. That encapsulation of a bygone era is often coupled by live jazz performances, dancing, billiards (hence your need for a group), and of course, some delicious cocktails for you to down while you’re enjoying the ambiance.

If you’re looking to throwback to a slightly different era, you might also try Birds & Bees on South Broadway. They’ve got the lock on that 1950s vibe, presenting you with a jazzy, speakeasy-styled drinking den that fit well in an old detective movie. It’s not just the atmosphere you’ll enjoy here, though. Birds & Bees has made a name for themselves with some classic cocktails that will knock your socks off.

Along South Alameda Street is where you’ll find Atlas, the “bar that was designed by the staff themselves.” The interior is decidedly sleek and modern, but the atmosphere is intentionally designed to be as welcoming to all as possible. As they say themselves, they want guests to be comfortable “no matter what part of the atlas they are from,” and you’ll surely dig the vibes they’re putting down with a drink in hand.

Admittedly, the name “Dankness Dojo” might take some getting used to, but don’t let that stop you from checking out this spot on South Olive Street. The Dankness Dojo is part of the Modern Times Brewery, and while they also offer a vegetarian menu (which, by most accounts, is hit or miss), their selection of finely-crafted beer is what you’ll really be coming here for, and on that front, they don’t disappoint.

One stylish lounge located within the Hotel Indigo on Francisco Street? Coming right up, in the form of 18 Social Lounge, the prohibition-inspired establishment perched on the building’s 18th floor. It offers some wild and inspiring views of the city below, and, on top of that, some strong drinks for you to enjoy while you’re making conversation or simply staring out into the City of Angels.

Just uttering the name “The Association” sounds so high class and exclusive. This hidden gem on 6th Street takes luxury to a whole new level, with top-tier aesthetic appeal (and some really nice leather furniture). Getting there feels mysterious, as it’s hidden underground behind an unassuming door. Step inside, though, and you’ll instantly be in awe of the fabulous interior and fine drinks.

If you want the high-end hunting lodge vibe (coupled with some amazing whisky), you’ll want to check out Seven Grandon West 7th Street. It’s something of a legend in DTLA at this point, having opened over a decade ago and helping re-establish DTLA as a city hotspot. On top of the unique atmosphere, they’ve got live music, billiards, and more for you to enjoy while you’re there, so have at it.

Another mid-20th Century theme bar, also on South Broadway (noticing a pattern?). Unlike Birds & Bees, however, Bernadette’s fits in better with the 70s vibe, and bills themselves as the “dumBEST bar in LA.” The accuracy of the assessment will be left to you, should you decide to visit, but they’ve got a lot going for them, including those fabulous draft beers and delicious ciders.

You want expansive and high end? Then you’ll want to hit up The Edison on West Second Street. Set up in a renovated power plant, they’ve taken the idea of a speakeasy and extended it to include a game room, live music, private lounges, aerial dancers, and more. You’ll get the full prohibition experience here, and after a few delicious drinks, walk away feeling all the better for it.

Head to South Spring Street, and you’ll find Clayton’s Public House, the modern take on a turn-of-the-century pub, with an expansive selection of beers and an elegant interior that will transport you to another time. It’s not just the beers that will delight you, though, their master mixologists will whip up some creative cocktails too, and you can even get a taste of some fine wine to go along with your evening as well.

Cole’s on East 6th Street claims to be the originator of the famous French Dip sandwich. That claim might be true, but it’s neither here nor there, as their sandwiches are so good you won’t really care who came up with it first. As for drinks here, head to “hidden” speakeasy in the back, and get your fill of old-school cocktails mixed to perfection. There’s a certain charm in this old-school establishment that keeps the crowds coming back for more, and we’ve a feeling you’ll want to add this to your list of favorite hangouts in DTLA.

Only Moments Away From These Apartments for Rent in Los Angeles

Getting downtown to visit one of your favorite bars is easy when you call DTLA home, and when you want to enjoy the wonders of the neighborhood while living amongst the pinnacle of luxury and modernity, there are few choices finer than Atelier. Here, you’re surrounded by the best — bars, entertainment, museums, shopping, dining — you name it. It’s the way an enriching LA experience is supposed to be, and high time you experienced it for yourself, no? See what Atelier can offer you, then make this your new home in stunning downtown Los Angeles.