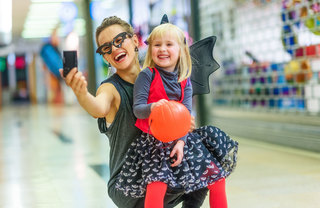 Halloween is right around the corner, so at some point over the month, you'll have to venture out from your [penthouse for rent in LA](https://atelierdtla.com) to go procure some fabulous costumes for that upcoming holiday soiree you're intent on attending. Thankfully, in the Los Angeles area, there's no shortage of amazing costume shops and Halloween-focused outlets where you can secure a great outfit for whatever Halloween mischief you have planned. We won't just leave you to search them out on your own, though, so today, we'll be highlighting a few top choices you can add to your list.

This costume dealer in North Hollywood has a long history of supplying wardrobes for all the big names across the industries of film, television, theater, and the like. They've been in the game since Hollywood first found it's legs nearly a century ago, and they've supplied costumes for more than a few IPs you may have heard of (like Westworld, Mindhunter, and Star Trek). Quality and professional garment construction are their mainstays, and you're likely to find just about anything you need in Western Costume Company's 120,000 square foot space for a reasonable price.

What should you expect from Halloween Town Costumes? It’s right in the name, thankfully! This awesome costume dealer in Burbank is actually an amalgamation of three stores in close proximity, and they’re all focused on helping you find some of the best costumes money can buy for the Halloween season. Want to be a Stormtrooper or some other Star Wars-inspired character this season? They can get you what you need. Maybe you’d prefer a unique take on a classic movie monster like the Mummy or Dracula? They’ve still got what you’re after, and much more, so be sure to check out their impressive stock.

The name Ursula’s Costumes is known far and wide, not contained to its homebase in Santa Monica. These purveyors of amazing dress-up outfits operate year-round, though they take care to amp up the action for the Halloween crowd too. Whatever you desire is likely a part of their expansive inventory, from fun takes on superhero outfits to space costumes, retro getups, and more. You might even try to mix and match to come up with your own unique Halloween style. It’s all possible when you visit Ursula’s, so let your imagination run wild and have some fun.

All Accessible From The Swanky Penthouse for Rent in LA

If you're looking to get to some of the best stores and establishment the City of Angels has to offer, you needn't look further than fantastic residences like Atelier. This beautiful DTLA enclave puts the wonders of this great city at your fingertips, many of them within walking distance. What's more, you can revel in the fabulous community spaces, top-tier amenities, and all the other delights that Atelier makes front and center. Comfort and convenience come first, and you'll have all you can handle here. Check out what awaits at Atelier, then reach out to make your move to one of the city's most outstanding downtown jewels today.