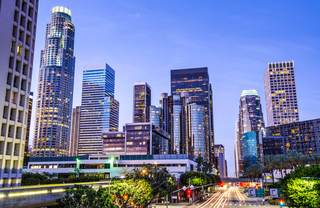 DTLA is known as one of the most culturally-rich destinations in the nation. Brimming with world class entertainment, five star dining, the fine arts, and gorgeous architectural marvels, this area of California offers its residents a tapestry of vibrant, high end living. Those living in a DTLA rental at Atelier may find themselves wondering, "How does such a place come to exist?" With a history is as colorful as the the city itself, it's no wonder why modern day LA is such a marvelous city.

Tracing the history of this city back to its roots, this area was once inhabited by the Native American people known as the Tongva. As time went on, Europe turned its eyes towards the Americas, and Spanish settlers soon began to move North into the lands from present day Mexico. A Spanish missionary by the name of Juan Crespi found the area to be the perfect location for a settlement, and in 1769 a group of settlers founded the town. Fertile land allowed them to harvest crops, and trade routes began to grow as fast as the town itself.

What started off as a small settlement soon became a bustling metropolis. As more and more people headed West to claim their own piece of land on a prime location, the area saw an its population explode. From just a handful of settlers, numbers climbed to 11,000 then 100,000 towards the turn of the century in 1896. Dirt roads turned into street grids as the first trolley lines were laid down, effectively expanding the city to near double its size. This influx of peoples from different cultural backgrounds and booming economy soon led to what is known as the Downtown's golden age.

By 1920, the rail lines in the city were the largest and most complex in the nation with over 1,100 miles. Land development increased, as did the population, and DTLA was at the heart of it all. Banks began to cluster around what was known as the "Wall Street of the West", freeways emerged, and hotel construction began. Downtown Los Angeles became the place to be with grand hotels such as the Baltimore, movie theaters, shopping, music, fine jewelers, and more. 1929 saw the first annual Academy Awards, while in 1932 LA hosted X Olympiad. This thriving metropolis saw some its best years in this era, but would undergo such drastic change and redevelopment that would ultimately lead to the utopia it is today.

A Decline, and a Major Upswing

The years after World War II were harsh on DTLA. Businesses turned their sights to developing areas outside of the city, the number of residents decreased dramatically, and historic buildings were demolished to make way for parking lots, but this downward dive wouldn't last forever. The spirit of the city would come to thrive again with elegant skyscrapers, an influx of top corporations, and new space for residents thanks to the Bunker Hill Redevelopment Project in 1955. All of this new development would continue for the next 60 years, restoring the area to its former glory.

The Modern City We Love

Beautiful parks, fine dining and regional cuisines, a vibrant nightlife, fitness studios, fair trade coffee shops, renowned breweries, and luxury DTLA rental condos are just the tip of the iceberg. The culture of the city is a living tapestry painted by the diverse residents, progressive mindset, and lively art scene to create something surreal. Downtown had its renaissance declared in 2010, and became home to Solomon Cordwell Buenz's architectural masterpiece, the Atelier, in 2017.

This chic glass structure stands 33 stories tall with floor to ceiling windows for the most spectacular views of the city. The Atelier's porte-cochere opens into its beautiful boutique lobby with 24 hour concierge service, but that's only the beginning. Residents can stay active with an expansive fitness center, a yoga and spin studio, and Fitness on Demand. Those looking for the ultimate start to their morning should head onto the Yoga Terrace. Sleek, modern architecture can be found in the club room, demonstrative kitchen, and private event lounge complete with a catering kitchen and terrace. It doesn't end there, though.

A pet spa and dog run are the perfect touch for those with furry friends, while the business man can take advantage of two conference rooms, as well as a lounge with a Wi-Fi terrace. Unwinding at the end of the day has never been better with a resort style pool deck, lap pool, spa, and cabanas. Friends and family can enjoy the BBQ and game terrace with its bocce ball court and fire pits, the Skyline terrace with its pool and perfect view of the city lights, or the Private Dining terrace for a perfect meal. Atelier offers everything you could need for both business and pleasure.

Units are furnished with the best in style and luxury in mind. German hardwood style flooring accents the luxurious Italian cabinets. Nest thermostats provide comfort while Bosch appliances provide residents with all they'll need. Floor to ceiling windows give a 360 degree view of DTLA, as do the balconies. Quarts countertops and backsplashes are illuminated by under cabinet lighting, while washer and dryer units give residents the privacy and comfort they deserve. Glass shower enclosures and deep soaking tubs are the perfect mix of style and relaxation.

All of these top amenities, unit features, and modern furnishes create the ultimate luxury living experience. No expense has been spared to deliver residents the finest living quarters on the West Coast. However, it isn't just about the place you live in, but the location. DTLA's unique history has created the the rich culture and lively art scene that those that live here enjoy. It's unlike anywhere else in the nation, and thrives more so today than it did in the golden era of the 20's. Come join us in the utopia that is Downtown Los Angeles, and see for yourself why so many choose to make their home here.