Entertainment This Fall in CA 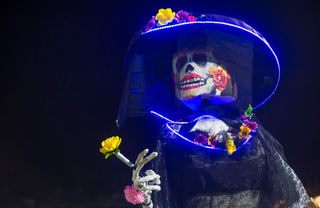 Looking for something different to do this Fall? Whether you live in the cheap apartments in Los Angeles or the surrounding towns, the city is constantly teeming with activities and events. Fall is no exception, and there is almost no end to the fun things you can take part in. Here are some of the top picks from around the area.

This outstanding performance portrays classic writer William Shakespeare as a rock star. Sounds strange, right? It is, but with 10 Tony nominations and a captivating plot it's hard to argue how captivating and successful this Broadway show is. A prior appreciation of Shakespeare isn't required, just strap in and get ready for one wild ride.

Ever wondered what it might look like to enter a room that stretches as far as the eye can see? Yayoi Kusama takes that concept and turn it into a spectacular artistic wonder. Thousands wait in line year after year for the chance to stand in this room for the allotted 45 seconds, just to give you an idea of how captivating the experience is.

Hosted at The Broad, you can also view Kusama's other series of installations, paintings, and wonderful creations. Tickets are always limited, so make sure to get yours ahead of time.

The Japanese American National Museum is hosting a series of Japanese Diaspora works from 17 different artists now through February 2018. This series focuses on intermingling the deep rooted culture of Japanese immigrants with the culture surrounding Latin America. If you're curious as to what that might look like think hanging cherry blossom filled petri dishes, carved wooden columns, and do a quick Google search for Shinpei Takeda's "Ghost Magnet Roach Motel".

It isn't Halloween without creepy-crawly spiders and the Spider Pavilion has more than enough to satisfy your fix for eight-legged wonders, or make your skin crawl. Hosted at the Natural History Museum, visitors can examine and learn about a wide variety of species from tarantulas to silk spinning varieties.

Ice in Southern California? Believe it or not, Pershing Square opens their immensely large ice rink each November to the public despite the sunny, 80-degree weather. Aside from the regular skating sessions, this rink also features music nights hosted by excellent DJs and a broomball tournament (hockey, but with brooms).

Led by the internationally renowned Maria Guinand, this choir sings ten compositions with Latin American influences surrounding the theme of Dia de Los Muertos. You can expect the usual brilliance from the Master Chorale, but with a more haunting overtones and scary themes.

After the stunning performance by Master Chorale, you might be in the mood for the upcoming Dia de Los Muertos celebration. This nine-day event takes place in Downtown's Grand Park over the entire 12 acres, featuring a series of gorgeous altars along with dancing and music. If you've never celebrated the dead with this Latin American tradition, then you have no idea what you're missing.

Are you a fan of Tyler the Creator? Then Camp Flog Gnaw is right up your alley. This carnival is an odd mix of hip-hop, punk, and pop with the unexpected twists and turns you might expect from the mind of rap's most off-the-wall icon.

Lana Del Rey, Lil Yachty, Earl Sweatshirt and Tyler himself will all be performing at Exposition Park during the 28th and 29th of October. You can also catch Trash Talk, Solange, and 2 Chainz, among others.

You can't really say you celebrated Fall without heading to DTLA's Oktoberfest. Head over to Pershing Square on the 21st or 22nd for live music from traditional German folk to Rockabilly and beat-boxers, some of the best pretzels and bratwurst in the country, and an amazing mix of craft beer from international suppliers alongside L.A.'s own local breweries. Admission is free, but make sure to bring cash for everything else.

The Los Angeles area features plenty of art walks throughout the year, but Downtown's is easily one of the most popular. There's something for every eye and taste, not to mention the plethora of dining and drinking options throughout the Historic Core. The galleries are open all night long, so view until your heart is content.

These are just a small taste of what L.A. has to offer this Fall. You can explore these and so much more just outside the Atelier, a series of homes that provide luxury living and resort-style amenities which bring a new meaning to high-end living in California.

From community features like the yoga terrace and state of the art fitness center all the way down to the German hardwood-style floors, every inch of these dwellings have been crafted to address a variety of lifestyles. Floor to ceiling windows offer serene views of the city, while to-rated appliances and Italian cabinets provide the comforts of home and green living.

Come explore a redefined definition of luxury living in the heart of California. Welcome to the Atelier.