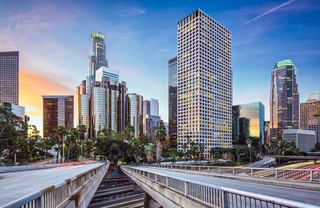 Downtown Los Angeles. In years past, the name was something of blight. Gritty, grubby, and grungy were just a few of the most applicable adjectives, as the area was marked by dilapidated buildings and a dearth of color within its almost six-square mile area. Now, after sustained revitalization, a new term is much more appropriate: vibrant. The neighborhood has transformed itself into a bastion of culture, history, and more importantly, mirth. It has experienced significant residential growth, with people from far and wide now clamoring to find downtown Los Angeles apartments for rent. What's drawing them in? Perhaps it has something to do with the fact that this is now a major enclave for true city living, one that rivals other popular urban centers nationwide.

Beginning in 1999, investment in the once rundown neighborhood began in earnest. Since then, more than $24 billion have been pumped into rejuvenating the downtown area, a move that has paid off in a big way. Where once there was naught but decline, there was now opportunity to repurpose old buildings and give people cause to migrate to downtown. In varying measures, a visitor to the area will find art, dining, shopping, and all the other urban necessities one would expect of a big city within comfortable distance, and with a uniquely "LA" vibe.

The districts of DTLA—14 in all—each represent something a little different. Bunker Hill, for instance, is considered the cultural heart of the neighborhood, home of the Museum Of Contemporary Art and the Walt Disney Concert Hall, among other structures. Meanwhile, in the Fashion District reside an assortment of outlets for designers, shoppers, and students of style. Within each of the separate districts, residents can find attractions to fit their individual tastes.

Let's take dining, for example. The list of restaurants is too long to expound upon each and every one in this article, but to get an idea of the level of choice, check out this article from Eater. As noted, the choices are so numerous that the Chinatown and Arts Districts require their own separate guide. You'll also note that the offerings are diverse—ranging from tacos, to sushi, to steak, and beyond. Each has its own flair that exemplifies the authenticity of the cuisine while adding a Cali twist that separates them from their counterparts in other cities. The "vibrant" moniker is most definitely applicable here, though, it extends beyond finding a great place to eat.

As mentioned, the arts—both visual and performing—play a significant role in DTLA's charm. The Broad is one of many standouts in this regard. A work of art in an of itself, the museum houses a great many contemporary works, in addition to hosting regular programs that showcase the brilliance of creative vision. On the performing side, The Orpheum Theatre sets the stage for both fantastic screenings and electrifying concerts (and more) at their grand venue. Adding to its character, The Orpheum is one of the last places in Southern California with a fully functional pipe organ.

DTLA's color comes from more than the buildings and what they offer, though. There is also an overwhelming allure generated by the neighborhood's atmosphere, one that residents and visitors alike can experience just by walking around. These accentuate the locale's rich history and beautiful architecture. Beyond the walking tours, there's a wealth of neighborhood-specific activities that highlight the individuality of downtown. Markets, the library, the parks - all have a certain something about them (and, more importantly) things to experience that bring DTLA to life.

As Good As The People Who Live There

Few neighborhoods would be complete without a colorful cast of characters, something DTLA has in spades. The downtown area is home to nearly 60,000 residents, all with diverse backgrounds. Currently, the residents of downtown are approximately 46% Caucasian, 17% Latino & Asian, and 8% Black. That number is expected to grow by some 125,000 within the next 20 years, bringing further change to the makeup of the area. Downtown has a higher than average density of "educated" residents, those possessing a high school diploma or higher. There's also a high veteran population in the area.

According to Curbed, the area is becoming more affluent as well:

"Among those who live in DTLA (but work elsewhere), the median income was $96,600. Those who are lucky enough to live and work in Downtown had a median income of $99,900."

Of those, the number of female residents is slightly higher than male residents (57 and 53 percent, respectively). The same report noted that most people who live in DTLA currently love it. They plan on staying in the area well into the future, and enjoy everything that downtown has to offer: convenience, comfort, and class. They can walk to work, enjoy the rich experiences of the neighborhood, and live in elegant buildings that bring a new standard to city dwelling.

Of those elegant city dwellings, there's one in particular that stands out. Atelier, the place where "Art & Culture meet," is considered by many to be world-class in its offerings, and situated quite conveniently within the action of downtown. Located on South Olive Street, the building stands near plenty of restaurants and night spots. It's also close to Grand Hope Park and the aforementioned Orpheum Theatre.

The building is an architectural wonder, a 33-story glass structure designed by Solomon Cordwell Buenz. Combining the best aspects of old and new, its unique appearance enhances the special attraction residents feel for the resort-like complex. Within, it's just as alluring, bringing the full breadth of choice and comfort to those that call it home.

There are numerous residences and floor plans. Though they fall in different categories, they all strive to provide the most. From one-bedroom designs on up, these layouts are optimized to be spacious, luxurious, and without compare. In-unit amenities include floor-to-ceiling windows, hardwood flooring, and modern stainless steel appliances. For the building, there's a 24-hour concierge, expansive fitness center, screening room, and business lounge (among other great perks).

When taking a look at the apartment offerings in DTLA, it's clear that Atelier has managed to create something as vibrant and desirable as the neighborhood it's located in. Be sure to check out some of the stunning views and read up on the building history to learn more.