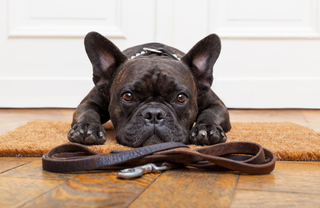 It is no secret how much people love their dogs. The AVMA estimates that more than 43 million — about 37 percent — of American households own a dog. On average, the number of dogs per household is nearly two, and those run the gamut from itty-bitty to big and bad. Obviously, the kind of dogs varies based on the circumstances: what does the owner prefer, what is available to them, and what’s best suited for their living situation? Anyone looking for apartments for rent that are pet friendly knows this well, as there are certain breeds and temperaments that seem better suited for standard rental community than others. If you’re wondering if your dog is going to fit the bill for the apartment life, or you’re thinking about renting somewhere and want to be sure you get the right dog for your arrangement, read on, as we explore the best dogs for apartment living.

Think of your typical apartment space. Generally, it’s smaller than the space you might have in a house, might not have the easy access to the outdoors that a ground-level dwelling would, and has plenty that a rambunctious canine could get in trouble with. For those reasons, the dogs you might want to join you in an apartment space will probably be smaller and and less energetic. Dogtime lays it out succinctly:

“When it comes to apartment pets, size does matter. Giant paws and long legs don’t always mix well with tiny living spaces. However, the size of your dog isn’t the only thing that matters. When choosing the perfect pooch for your apartment, you should also take into consideration the dog’s energy level, noisiness, and even friendliness (neighbors in close quarters means lots of socializing and meeting new people and other pooches as well).”

They provide a quick overview of a few breeds that might fit the bill, and even have more expansive lists of dogs that are suited well to apartment life, along with those that aren’t. The overall trend is obvious, and fits the earlier stated thesis. Good apartment dogs are smaller and calmer, while not-so-great varieties are larger dogs, more active dogs, and those that require boundless attention.

For a more in depth look at suitable breeds, though, we’ll turn to the American Kennel Club, who note that there are many breeds that are low-maintenance and can take to living in the confines of an apartment quite well.

Among the top picks, the majestic Bulldog is a strong entry. When it comes to size, the Bulldog is superbly manageable. Coming in at around 14 inches in height and 50 pounds in weight, it’s a manageable breed that isn’t quite tiny, but, on the other hand, isn’t so gargantuan that it wouldn’t be able to navigate a narrow hallway. They’re lazy, they’re friendly, and, by-and large, they are well-loved, ranking fourth on the most popular dog breed charts:

“They are one of the most popular breeds according to AKC® Registration Statistics due to their lovable and gentle dispositions and adorable wrinkles.”

That distinct appearance is one of the Bulldog’s defining characteristics:

“The perfect Bulldog must be of medium size and smooth coat; with heavy, thick-set, low-swung body, massive short-faced head, wide shoulders and sturdy limbs. The general appearance and attitude should suggest great stability, vigor and strength.”

When it comes to attitude, the Bulldog has a most regal one, fitting with its origins in England:

“The disposition should be equable and kind, resolute and courageous (not vicious or aggressive), and demeanor should be pacific and dignified.”

They’re not difficult to train either, so getting a Bulldog would be a great choice for those trying to pick out a breed for their first pup.

If you want to go a bit smaller in size, the Cavalier King Charles Spaniel fits the bill nicely. The dog is only about 12 inches in height, and weighs a mere 13-18 pounds. This tiny dog is one that you may have seen before, due to their immense popularity:

“Sex and the City fans will recognize this breed as the same as Charlotte’s dog, Elizabeth Taylor, but they first gained popularity as the preferred pet of King Charles II and still appear frequently on the UK Kennel Club’s list of most popular breeds.”

They rank 19th on the popular dog breed charts, and while somewhat active, their chief personality traits are their grace and affection:

“The Cavalier King Charles Spaniel is an active, graceful, well-balanced toy spaniel, very gay and free in action; fearless and sporting in character, yet at the same time gentle and affectionate.”

They’re good with children, good with other dogs, and, if you’re looking for an option that provides longevity, you’re in luck: Cavalier King Charles Spaniels have an average lifespan of about 12-15 years.

Eager to please and small in size, the Havanese makes for a great choice when considering apartment dwelling. The Havanese rarely grows taller than 11 inches tall, and weighs around 7-13 pounds. They rank 23rd on the most popular dog breeds, and can live for approximately 14-16 years. A native of Cuba, these dogs are a treat to view:

“A curled-over tail is a breed hallmark, as is the gorgeous silky coat, which comes in a variety of colors. Some owners enjoy cording the coat, making it look a little like a Puli, and others prefer to clip it short to reduce grooming time.”

They’re happy and get along well with kids and other dogs, making them a great choice for areas where you might have guests or run into neighbors dogs on a regular basis.

Slightly on the larger side, the Greyhound might not be the first to come to mind when thinking of a new canine roommate. They only rank 151 on the popularity listing, and can grow up to 30 inches tall, weighing in at around 70 pounds. The fact that they were bred for speed would instantly give the impression that they’ll go crazy in a confined space, but as a houseguest, the Greyhound is as cool as a cucumber:

Combined with their nobility and intelligence, they make for excellent companions when you’re living in an apartment space, and the fact that they get along with other dogs means few incidents as long as you take the time to train them right.

This amazing apartment community in Downtown Los Angeles provides a perfect space for pet owners, one that comes with the wonders of DTLA, comfortable accommodations for you and your four-legged friend, and extras like the Pet Spa and Dog Run for you the both of you to enjoy.