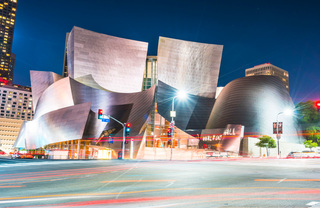 Take a break from poring over the apartment finder for a Los Angeles apartment, there’s an amazing new experience in town you’ve got to check out over at the Disney Concert Hall. Dubbed “Thought Experiment in F# Minor,” this tour brings the wonders of the famed performance space to life in a brand new way:

“Created by acclaimed multi-media artists Janet Cardiff and George Bures Miller and featuring Los Angeles Philharmonic musicians, Thought Experiments asks viewers to follow a film recorded in the past along the same route they are traversing in the present.”

Sounds pretty groovy, if you ask us, and if you’re thinking this is just the sort of experience that you’d like to take advantage of in your free time, keep reading. Today, we’re going to be taking a look at the finer points of this brand new tour and what you’ll need to do to catch it for yourself.

You’d be forgiven for confusing augmented reality for the similarly titled virtual reality at first glance, but the two terms do hold some distinctions, and it’s important to point them out before proceeding so we’re on the same page. Augmented reality, also known simply as “AR,” refers to “the blending of interactive digital elements – like dazzling visual overlays, buzzy haptic feedback, or other sensory projections – into our real-world environments.”

This is different from virtual reality, in the fact that it blends elements that aren’t “real” with what you can see in real life. VR, on the other hand, completely immerses users into a virtual world, cut off from the reality of their surroundings. For a shorthand, just think of games like Pokemon Go, which, though the magic of smartphone technology, blended creatures and items from the world of Pokemon into our very own. The Thought Experiment in F# Minor tour operates similarly, fusing virtual elements into the Disney Concert Hall by way of an iPad, as we’ll cover next.

Now to the wonders of Thought Experiment in F# Minor. This experience launched on March 1st, 2019, and is the brainchild of husband/wife duo Janet Cardiff and George Bures Miller. In their planning for this AR tour, the drew from multiple sources for inspiration, including a short story by Philip K. dick, texts from their co-workers/other creators, the building’s architecture itself, and even a “real violent incident that happened in Vancouver, Canada.” The result? The duo calls it a form of “physical cinema, where “the fictional world of the film blends seamlessly with the reality of the architecture and body in motion.”

During the 40-minute foray, you’ll experience a variety of far-out imagery, in the form of dancers, drum sessions, a surprise wedding, and more, stretching from the Concert Hall’s lobby, performance area, underground car park, and beyond. It’s all accompanied by Cardiff’s dark and dispassionate narration, which weaves the plot of this excursion together, along with the sounds of the LA Philharmonic’s own performers.

The music, you might recognize, is largely riffing on the ideas of a Bach fugue in (you guessed it) F# Minor, and features all the interesting rhythms and furious string performances that one might expect from such a tune.

Stealing the show along the way, perhaps is the “strange cat person” you’ll meet, played by Jena Malone, who’s enough of a show stealer to have warranted their own article discussing their performance. The sci-fi themes are also strong in this storyline, with plenty of time jumps and disorienting visuals to keep you on your toes:

“The video works with time jumps, putting you into areas at different times of year, in different types of weather. The disorientation of the experience works in tandem with science fiction elements, including references from Philip K. Dick's ‘The Preserving Machine’ to Schrödinger's cat, tying in with the cat-person character.”

It all ties into the themes of Thought Experiment in F# Minor, which seek to weave in concepts as deep and provoking as classical philosophy, future technology, quantum mechanics, and more. And of course, who could forget the crux of the experience — how music has the power to influence the mind. You’ll see for yourself just how sound can be wielded to its true effect when you head on the tour for yourself.

And before we forget, the method of embarking on this groundbreaking experience? You’ll be armed with an iPad Mini and a pair of headphones, playing something called “binaural sound.” Without getting too lost in the weeds, it’s designed to make you “feel like the sounds are coming from all around you,” which adds to the immersion of the entire tour. The effect of seeing something on your iPad screen that doesn’t truly exist and hearing sounds that aren’t really there plays some interesting tricks on the mind, and that disconnect is part of the what the tour is all about. To hear LA Weekly tell it, the show is one that is worth your time:

“The result is a deftly blended cocktail of introspection and engagement — a fresh experience of one of the city’s most iconic buildings and the forces that animate it.”

Best of all? This tour is free and open to the public, so all you’ve got to do is head on down to the Disney Concert Hall and get in on the action — you won’t regret it, and will likely feel richer for the experience.

One of the great things about Los Angeles is that there are plenty of great places to call home. If you’re looking in the downtown area, you needn’t look further than Atelier. With proximity to all the best DTLA has to offer, and a level of luxury and convenience that’s virtually unmatched, why would you want to live anywhere else? Be sure to check out everything that Atelier has to offer you, and make this your first choice for the ultimate downtown Los Angeles experience.